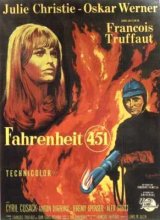 Every litte boy knows what firemen are there for. Their job is to put things on fire.

This sounded weird enough to me to go and see this movie. For most part the movie depicted a 1984-ish world with focus on books, or rather their absence.

Books are forbidden and considered to have a bad influence on people as they confront the reader with too complicated thoughts and emotions. The fire department is called whenever books need to be destroyed. Our hero, a fireman himself, secretly rescues some books to take them home and read them. He does so to escape from his boring drug addicted wife who does nothing but watch a silly TV soap called TV family. She represents the average person in this world. The drugs are actually provided by health care, as unhappiness is seen to be an illness.

Of course there is an embedded love story. The girl, obviously a book reader too, is removed from her job as she does not fit into the system. When the fire department finds the books in the girl's house, the two of them flee into the forest of the living books. The living books are people in the forest who each memorized the contents of a single book to protect it from being destroyed. With this happy news the movie ends.

It would have been interesting to learn where the boss of the firemen had all his detailed book knowledge from. He summarizes their contents to our hero to make clear how bad they are, before burning them. But apart from the hero and his girl all characters remain shallow. This shallowness may be intended to demonstrate the dullness of this world.

The movie tends to be praising books beyond the bearable at some points, especially in the forest. Considering its age I'll give it a 3 out of 5.