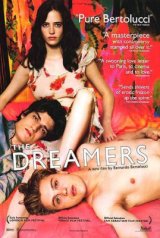 An introverted movie-loving american student in his early 20s who is spending a year in Paris runs into an apparently open minded and well educated girl and her brother of the same age. At first he feels lucky to be accepted by these people and to be allowed to take part in their lives. They challenge him a lot and he has a hard time to keep up. But eventually he gets to think about the situation and it dawns on him: The two are not open minded, they just never grew up and live in a imaginary world provided by the movies. Knowing this he is suddenly taking the lead and tries to help the twins. But he is asking too much from them and leads them into disaster.

I have to admit that I suspected bad acting in the first few minutes because of the way the twins presented themselves. Something wasn't quite right. But as it turned out, it was intended. They perfectly played two children imitating adult behavior. This disguise gets more and more flaws throughout the movie and is totally destroyed when they almost starve after their parents left for a couple of weeks.

Scenes like a childish suicide attempt make the movie even more lovable. 5 out of 5.